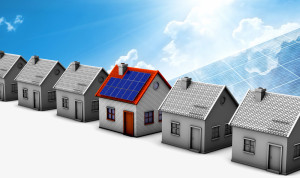 It started in real estate several years ago – going green became the new rage. It started with the removal of lead paint; the selection of natural, renewable materials for flooring; and now the ultimate green – solar panels. It’s not just about the environment; it’s also about raising the resale value of your home.

Many of the initial residential solar energy systems were installed in sunny California. Today homes with rooftop solar panels can garner tens of thousands in premium resale value in that State. This trend is quickly spreading to other areas of the U.S. and as with most things in life, size and age matters.

The U.S. Department of Energy’s Lawrence Berkeley National Laboratory has completed a study of California real estate sales that suggests that for each kilowatt produced by a residential solar energy system, a home’s resale value increased by $5,900. With most residential systems producing between two and five kilowatts, a home with a larger rooftop system could add up to $30,000 in resale value.

The study also found that, in addition to a system’s production capacity, both the age and perceived condition (how shiny the panels are) can make a difference in resale value. In some instances they saw a decrease of nine percent of value annually as the system aged. That decrease in value was a surprise, as the San Francisco Chronicle has stated that the average electricity-producing prowess of a silicon solar panel declines at a rate of less than one percent per year. However, the differential is most likely to be due to consumer perception that older technology is not as viable as newer technology.

Depending on your location (such as California where solar energy has been embraced and the sun shines most of the time), the immediate increase in home resale value can be greater than a solar energy system will cost. A solar energy system installed today can yield a 25-30 year life span.  When looking at resale value don’t forget to depreciate the system over time. It is also important to recognize that just as real estate values vary from place to place, the premium that consumers put on solar energy systems also vary.

Still not sure if solar energy will pay off?  For more information download this .pdf from the U.S. Department of Energy:  http://www.nrel.gov/docs/fy09osti/43844.pdf

Why Every 4 Minutes Another US Home Owner Installs Solar Panels!